I never graduated from anything before

I never graduated from anything before

My name is Daniel and when I was 16 my stepmother held my arm and my cousin put a needle in it. That was the first time I got high, and I liked it. My childhood with my father’s side of the family made Jerry Springer look like Leave It to Beaver, and drugs were my coping method.

I was a functioning addict. After my divorce, I raised my kids by myself. I spent 30 years in the restaurant business, even becoming an executive chef. But I got tired of being told that I was great but they could only give me so much money because I didn’t have my degree. That fueled my addiction even more.

At last my desire to work abandoned me but the addiction didn’t. I tried to quit, but I would always look back. I wasn’t using to get high; I was using just to function.

I decided to kill myself. I went to see my kids one last time. They didn’t know what I was thinking. And then I found Open Door Mission.

You have to understand, I was so mad at God. I knew He didn’t care about me. If He did, He wouldn’t have let that stuff happen to me and my siblings. Sometimes, when I was little, I would stay with my grandmother and she would take me to church. It was so intimidating. I was in a living hell, but then there was this place where I could just be a kid and I didn’t know how to do that.

But I thought trying the Mission first would somehow justify my death later. When I learned more about the program I also thought how great it would be to graduate from something. I had never graduated from anything before. It wouldn’t matter much, of course, because I was planning to kill myself, but I wanted to belong somewhere.

For the first three weeks, I never smiled. The other guys bet against me because I was always so angry and aggressive. My counselors told me to be honest, so I was honest. I told them that these groups didn’t make me feel like a shot of heroin did.

Then John Molina from Lakewood Church came to speak at our Celebrate Recovery class one day and told the story of Jesus and the lepers. I felt like I was standing with those lepers and all I had to do was reach out. Things changed after that.

The Mission taught me that I could talk about my anger and not hold onto it. I could talk about my grief; that was beaten out of us as kids. And when I read the book of Jonah I learned you could talk to God that way too. One day I went out to the prayer garden on campus, and I got real with God. I told Him I didn’t appreciate the things that happened to me when I was little. Then I took Him at His word, that He could change me.

I graduated from the Mission in May 2016. The guys I came in with, we bonded, and we called ourselves the greatest graduating class in the history of the Mission. And my mom came! I always wanted a relationship with her but my anger wrecked things. Mr. Freeman at the Mission told me to write her a letter every week while I was here, and that restored the relationship.

Today I’m working at a bagel shop full-time and going to school full-time. During the program, I was valedictorian of my class in the hospitality certification program at the University of Houston. Now I’m working on a “ bucket list” goal of learning college algebra, and I’ve got a 3.8 GPA. I’m in the honor society. I’m not used to positive things and at first it was hard to accept that I do belong there, but I’m building on what I learned at the Mission.

My ultimate goal is to complete my culinary degree. I want to use my talents as a chef to serve God, like in a food truck that ministers to lost teenagers or teaching missionaries to cook the food of the culture they’re serving.

I go back to the Mission on Thursday mornings when my mentor does the devotions. I’m tied to the Mission, my church, and the place where I’m living. I never belonged anywhere before. Now people would miss me if I wasn’t there. My favorite verse is Ephesians 3:7 in the NIRV translation, “I now serve the good news because God gave me His grace. His power is at work in me.”

I’ve always lived in fear of tomorrow and been tormented by the past. Today I have peace, and that’s because of what donors and supporters of Open Door Mission helped give me. I learned everything about the way I’m living now from the Mission. It wasn’t easy, but what they said would happen has happened.

Daniel’s story of hope and healing is inspiring. Our long-term recovery programs exist to help other men in the Houston area find healing. Will you help provide this help to others? 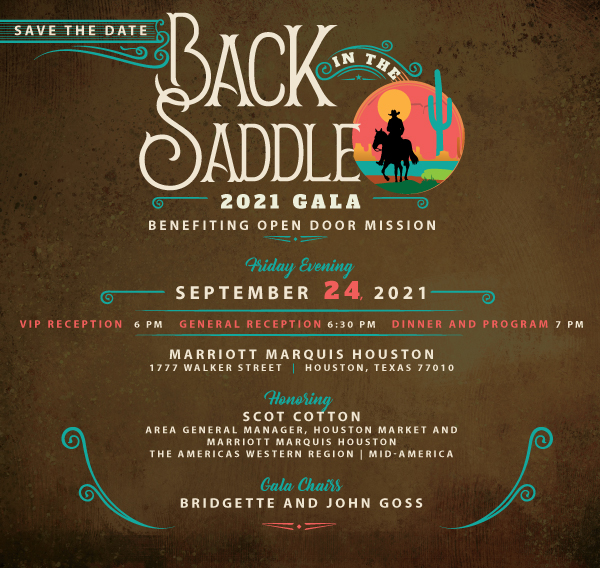 Let's get Back in The Saddle